A playful look ahead towards the future of our working world

LABOURGAMES was a three-year artistic research project (2016-2019) that took place in three European countries. It questioned the relationship between work and play and thus created innovative perspectives on the fundamentally changes of the work world in Europe by producing analogue and digital games.

With LABOURGAMES BERLIN, urban dialogues – in cooperation with the studio for design anschlaege.de, the Initiative Creative Gaming, as well as with the Anna Seghers Community School in Adlershof and the Max von Laue School in Lichterfelde – implemented a pilot project on how to deal with this particular topic in schools.

• How is our working world changing in the age of digitization and automation?
• What does this mean for young people when it comes to training and working life?
• Which jobs will soon be taken over by robots or machines?
• What do you need to know, to learn and be able to do?

We further developed these questions together with the experts of tomorrow, the young people. Then we took a second step with a playful approach which then helped us to find some basic answers.

The LABOURGAMES BERLIN project took up playful and agile development methods that are successfully practiced in software development and game design.

The main goal of the project was to give the younger generation an insight into the methodology of contemporary art and the production of cultural work.

The skills and self-efficacy of young people was promoted against the backdrop of an increasingly digitized working world. Using playful approaches, goal-oriented, participative, transparent and hybrid work was appropriated and deepened.

LABOURGAMES Berlin is realized with additional support from the Berlin Project Fund for Cultural Education.

Measuring the city by means of artistic investigation and creative research

Urban planning in Berlin is carried out according to various bureaucratic guidelines and legal regulations. This regulates the number of daycare spaces as well as the maximum eaves height of the houses, the distance between two bus stops and the total number of underground parking spaces in new buildings, the number of benches and trash cans in Berlin’s parks and the density of playgrounds and their safety regulations.

These guidelines can be understood as a kind of grammar with regard to urban planning in order to design the utilization of a city in the interests of the citizens. But what are the needs and concerns of the younger generation in Berlin and how can they be recorded, documented and made visible?

The project took the principle of urban development literally and measured the city in the form of an artistic investigation and creative research with learners. They themselves decided on the question that forms the starting point for research. In this way, they were involved in the process right from the start. This ensured that topics children and young people are interested in were examined.

A bundle of methods from aesthetic research were used to discuss topics and produced results that introduced the participants to the complex network of the city and gave them the opportunity to receive self-generated answers to their own questions that are directly related to their realities in life.

The project was realized from October 2015 to September 2016 in cooperation with two schools in Siemensstadt and Adlershof, a youth centre in Kreuzberg and a youth club in Neukölln.

On our weblog, the four artistic instructors continuously collected impressions and experiences (german only).

The project was realised in cooperation with Evin e.V. and was mainly funded by the Berlin Project Fund for Cultural Education. 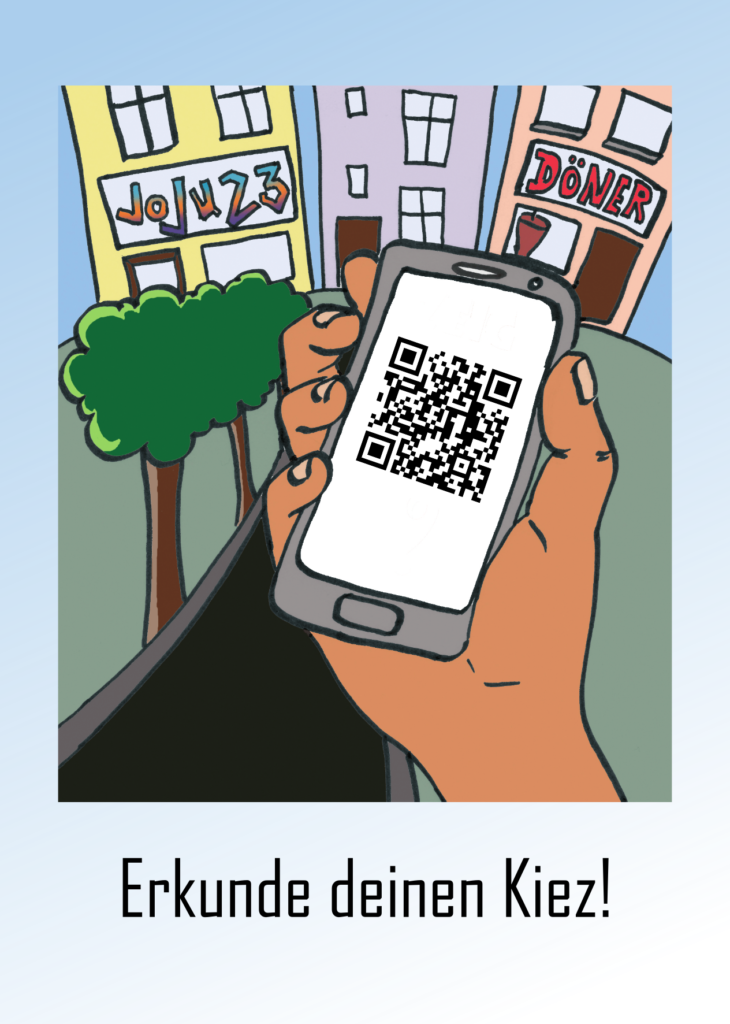 90 seconds
for a better future

On 14 and 15 May 2010 three movable video booths in the shape of honeycombs emerged for 32 hours in public space in the city centre of Berlin close to the Brandenburg Gate and the Charité Hospital. These sculptures served as mobile video-studios and  pedestrians were entitled to give theirs individual statements to the topics such as SUSTAINABILITY – CLIMATE CHANGE – VALUES.

Each respondent had the chance to answer three  questions in exactly 90 seconds. These questions were selected from a pool that has been created in advance.

All answers were recorded and then published promptly on the project-related website. The output in total were more than 40 clips.

The project was a contribution to the TRANSITIONS – LIFE event initiated by the Academy of Arts Berlin.

My individual track in urban space

By using of geo-position technology, a very appealing piece of information can be added to photography, namely the place where the picture was created. The image can then be opened in connection with a freely available map service on the Internet, for example Google Maps.

What appears to be an unnecessary technical feature creates a new dimension in the creation of urban digital photography and an immense range of playful opportunities, especially for young people.

During a workshop week at the premises of the Schöneberger Südgelände, the use of GPS technology was offered, which made the Schöneberger Süd-Natur park an attractive media playground. Interesting routes and paths were created on site with digital cameras and GPS recording devices, which were then immediately visible on the Internet.

The action week at Bildungswerk Lokhalle was initiated by id22: Institute for Creative Sustainability, Zukunftsbau GmbH and Grün Berlin GmbH

An urban research program by means of digital photography and video

From 2006 to 2011, urban dialogues was partnering with the vocational training centre Zukunftsbau GmbH in Berlin and provided a series of educational projects that were based on creative and artistic education methods.

The target group were young and unemployed people. The project aimed at integrating in both, further qualification or occupation.

The concept as well as the artistic training part  of Metropolis was based on the contribution of urban dialogues members Stefan Horn, Monica Segura-Marquez and Malte Seichter.

The curriculum was structured in three blocks over a period of seven months.

First step was an arts and education project for the entire group of participants followed by a deepening phase based on a taylor-made curriculum in the fields of digital photography, video, urban research and cultural management. The last stage of the program was for individual work of the participants that leads into a final exhibition.

The project was the continuation of the literary salon with similar means – but for disadvantaged children and adolescents with migration background. The letters campaign responded to the social imbalance the Pisa study had revealed a few years ago.

The district management Wrangelkiez had made a call for an education offensive and so it was a good idea to expand the salon’s artistic offer to a multi-cultural and multi-generational offer and to encourage children from disadvantaged families with migrant background to read and learn with the established method of aesthetic sensitization – by changing location and perspective.

Children who almost have never been to a theatre and who do not learn an instrument were given an unusual range of cultural opportunities in our old butchery just around the corner in their neighbourhood. At this extra-curricular learning location, they were able to experience themselves as creative and strong personalities which fueled their self-confidence and thus their willingness to learn.

Right from the start, the holistically oriented project was closely networked with all educational and childcare facilities based in the neighborhood and even large-scale literary projects in Berlin incorporated our expertise into their development concept.

In collaboration with professional literary educators, interactive workshops have been developed especially for children from the Wrangelkiez district. From toddlers and elementary school students up to the sixth grade learners.

In addition, there were also readings for children and parents with well-known children’s book authors or writing and painting workshops with renowned illustrators.

Right from the start, the offer was very well received and attracted a lot of public attention. However, the budget that the Senate Department made available for urban development was tight. Thanks to additional private and public funding and a large proportion of volunteer work by the employees, from 2003 to 2006 around 1,000 children were able to attend the approximately 50 workshops of the letter campaign.

In 2004, the project received the first prize for civic engagement from the Berlin Senate Chancellery. But in the absence of further funding, it was discontinued at the end of 2006.

Exploring the jungle of signs
in the city of Berlin

Six professional artists and seven young adults from social training centers explored the jungle of signs of Berlin to make a comprehensive synopsis and inventory of their urban environment. Archiving the signs of the city they jointly sought meaning in the immediate world of the surrounding urban chaos.

All participants immersed themselves in the metropolitan microcosm in a playfully designed urban expedition to discover the immediate world of signs from the new vantage point of explorers. The result was over 2000 digital images archived by the 13 photographers in the web-blog.

Aside from the hands-on practical experience with artistic and new media production, the project was an essential step for young people seeking to find methods in which to position themselves as unique local identities within global power relationships.

The young participants learnt to reflect upon their environment, developing a sensitive and aesthetic eye for the visual landscape of urbania, and upon this experience created a semiotic inventory of the signs and categories of the metropolis Berlin.

For one month in early 2004 the finished works were then presented to the wider public in the form of an exhibition. In accordance with the artistic approach of urban dialogues we did not use the closed space exhibition area. With the support of the Berlin Transport Company (BVG) the underground station Jannowitzbrücke was transformed into an exhibition space for the signs and images of Berlin.

The exhibition turned the space into a temporary culture station. Nearly half a million passers-by engaged en passant with the photographs and collages exhibited in this public space.

The project was funded by the Fonds Soziokultur and supported by BVG Public Transport Berlin.